A doughy, creamy, rich indulgence prepared with the madness of honey and nuts – here is the best and simplest recipe for baklava – may it be melt in your mouth good and may it remind you of all things food. Hailing from the  Mediterranean and Middle Eastern regions, baklava is usually served by Christians, Muslims, and Jews during special occasions such as Christmas, Easter, Ramadan, and Rosh Hashanah or the Jewish New Year. In some places, it is also served at weddings. So are you ready to take on the baklava journey now? Let’s dive in!

Baklava is a sweet and rich pastry made with filo dough and filled with a variety of nuts such as walnuts, pistachios, and almonds. It is then held together by honey and butter. Some people also prepare baklava with just a pistachio filling, making it an even more prized and expensive affair. Others usually just sprinkle ground pistachios on top.

It is important to note that since baklava is rich in sugar, butter, and nuts, it might not be the best idea for those with diabetes. However, it might be helpful to know that it also has a sugar-free version. Having said that, one wouldn’t really swear by the taste of the sugar-free baklava, as it is one dish that is known for its sweet taste. In some circles, you might also hear them call baklava as the sweetest dish out there.

Baklava is a sweet nutty dessert made with filo dough. Photo Credit: Shutterstock

The origin of this sweet treat is a bit disputed as there are many countries that fight to claim it as their own. The Turkish gave baklava its name, though it is widely viewed to be of Greek origin. There are no historical documents proving its actual place of origin, but if certain sources are to be believed, baklava is of Central Asian Turkic descent. Other sources, such as the book by Alejandro Colas on Food, Politics, and Society, state that the desirability of this dessert makes it a tough contender that everyone wants to claim, from the Arabs and Turks to the Greeks.

As stories go, there is one which comes from the Topkapi Palace, Istanbul, Turkey, where the great sultan in the 15th century distributed the now known version of baklava during the Ramadan procession. There are also mentions of baklava recipes in ancient Chinese cookbooks. The paper-thin technique of rolling the baklava dough comes from the Greeks, where it is known as ‘filo’ or ‘phyllo’, meaning ‘leaf’ or ‘sheet’. Later, in the 18th century, from the time of the last Queen of France, Marie Antoinette, a pastry chef created the special ‘dome’ style of cutting baklava, thereby giving a French touch to it.

So maybe, put simply, it is difficult to decipher where exactly this delicious dessert comes from, but what is fairly easy to understand is that no matter where it comes from, baklava tastes divine. This brings an end to the origins and pushes us forward to the next and most important question – how to make baklava?

Often considered as a difficult-to-make-recipe, baklava is fairly easy to prepare given you follow the instructions properly. Many people choose to get filo or phyllo dough from the market instead of preparing it at home. This cuts down on the labor of the whole process by a great margin. In this recipe, we take phyllo dough from the market and straightly move on to the baklava.

Now before we begin, it is important to note that this sweet dish has different variations to it, thanks to its much-debated origin. It can be prepared with just pistachios or with a combination of different nuts. Many people don’t put pistachios at all on and in their baklava. Probably the trickiest part while preparing this dessert is the handling of the thin and soft phyllo sheets. Let’s take a look.

How to Make Baklava? 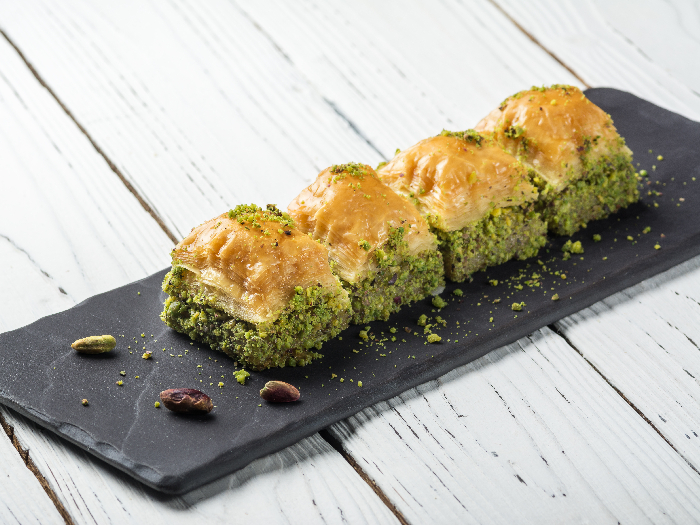 A flaky, crispy, and heavenly baklava recipe to make at home!

Thankfully, baklava has a long shelf life. It can stay for up to 2 weeks easily when put in the right conditions. Make sure to keep it in an airtight container in a fridge. If you want to maintain the crispiness of the dessert, store it at room temperature, however, keep in mind that when kept outside of the fridge, your baklava might not stay beyond a week.

Tips for the Recipe

If you want to make things simpler, here are a few tips to keep in mind.

That is all there is to the recipe, now make sure you enjoy it with your friends and family! If you like the recipe or try it at home, we would love to hear from you in our comments section.