8 Types Of Millets That You Can Include In Your Diet

When you think of millets, the one variety that instantly comes to mind is foxtail millets. This is because they are considered as one of the oldest cultivated millets and are also easily available everywhere. But, that is not the case with all the other varieties of the grain. Yes, there are other types of millets that are relatively unknown. Chances are that you may have known about them but weren’t aware of them being a type of millet

Millets may be an ancient grain but they are coming up in a big way recently as a gluten-free substitute to cereals that have a high glycemic index such as rice and wheat. No wonder then that most dieticians recommend adding millets to your diet, particularly if you wish to lose weight and manage diabetes. They are known to benefit our health in myriad ways. Our article, 5 Amazing Benefits Of Millet, will explain in detail why including this cereal in your daily diet is good for you. But won’t it be nice to know the different types of millets with its variances in size, color, taste, texture, and use? Come let us take a look at each one of them in detail.

Naked variety:  The predominant varieties under this category include finger millet, pearl millet, and sorghum. They do not contain any of the hard indigestible husks in them. This means that they do not need to be processed after they get harvested. They can directly be used after they are cleaned.

Husked variety: The husked ones, on the contrary, contain an indigestible seed coat, which cannot be consumed until and unless the husk is removed. These include kodo millet, foxtail millet, and little millet among others.

Now let us look at the different types of millets individually, shall we?

Local name: Finger millet, which is popularly known as ragi and nachni, is a gluten-free grain that is a great alternative to rice and wheat because of its nutritional value.

Region: It is a cereal crop grown in the arid and semiarid areas in Africa and Asia.

Color: It is either white or brown in color.

Taste: It has a unique, rustic taste.

Nutrient value and health benefit: It is a nutrient-dense cereal with a long shelf life and is a recommended source of nutrition for people with diabetes and high cholesterol. A 2013 research published by a team of Indian researchers shows how finger millet is richer in fiber, minerals, and amino acids than white rice and how including it in one’s daily diet can help regularize blood sugar and cholesterol levels.

How to use: You can make a variety of delicacies with finger millet flour right from savory pancakes (dosas), cookies, cakes, and porridge.

Local name: It is alternatively known as Kangni (in India), Italian millet, and German millet.

Region: It is native to Southern Asia.

Color:  Its color ranges from pale yellow to orange, red, brown, or black.

Taste: It has a mild taste and takes on the taste of whatever you serve it with.

Nutrition value and health benefit: Foxtail millet is a popular type of millet that is rich in iron and calcium. It is because of this that it’s considered to be an immunity-boosting food. It has a glycemic index ranging between 54 to 68, which is lower than even sorghum that has a GI of 70, leave alone rice and wheat, which are definitely likely to have a higher value.

How to use: Foxtail millet works best as a substitute for white rice. You can use it to make any kind of rice preparation you want, but be wary of how much water you use for boiling. Ideally, for every one cup of foxtail millet, you use 2 cups of water.

Local name: It is also known as bajra.

Region:  Pearl millet needs well-drained sandy or light loams to grow. It can survive in soil that has low pH levels and fertility. It cannot thrive in standing water and is a drought-resistant crop. It is a warm-season crop and is grown mainly in Africa, the Indian subcontinent, and southeast coastal plains of the United States.

Taste: It has a subtle nutty flavor.

Nutrition value and health benefit: Like every other millet, it is said to be rich in iron, calcium, fiber, potassium, magnesium, and protein. However, according to a study published by a team of Indian researchers in the Journal of Pharmaceutical Science pearl millet is said to have iron content that is 8 times more than in rice. This grain too has a low GI index and is a recommended cereal for those with diabetes. It also makes for a great lactagogue, which is an agent that promotes the secretion of milk. That is why it is fed to cows to induce lactation and help in the secretion of milk.

How to use: Pearl millet is usually grounded to flour, which is then used to make bread or flatbreads (chapatis), muffins, biscuits, cookies, and the like. Once ground, the flour can last up to 15 days.

Local name: It is also known as jowar.

Region:  It is found and grown mainly in tropical and subtropical regions of Africa and Asia.

Taste: It has a mild, earthy flavor.

Nutrition value and health benefit: Sorghum is an ancient grain with a high nutritional value. According to the USDA, sorghum is rich in iron, calcium, magnesium, phosphorus, potassium, copper, manganese, selenium, thiamin, niacin, and riboflavin. This grain is rich in antioxidants like phenolic acids, flavonoids, and tannins. Thus, by including this grain in one’s diet, one can keep oxidative stress and inflammations at bay, which are the predominant cause for chronic diseases. Moreover, its rich fiber and protein content helps to keep the gut healthy, blood sugar levels stabilized, and body weight managed.

How to use: You can consume it wholly or by grinding it into flour. This grain can be cooked like quinoa or rice, or popped like popcorn. Its flour is used to make gluten-free bread and flatbreads. It is also used as a syrup, which is later used to sweeten processed foods. Apart from its use in food, it is also used as a natural and cost-effective fuel source.

Here is our article, Gluten-Free Sorghum Flour: Health Benefits & Uses, that will explain why including this grain in your daily diet may prove beneficial. 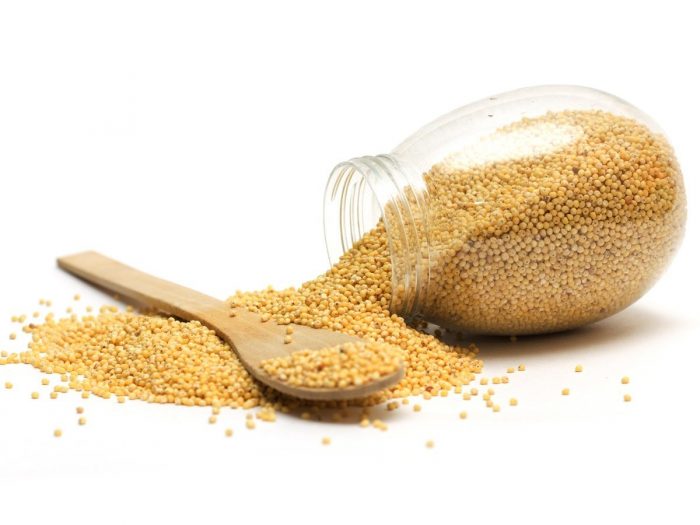 Millets are known to be gluten-free with low GI that helps reduce the risk of diabetes. Photo Credit: Shutterstock

Local name: It is also known as Sanva and madira in India.

Region:  It is mostly grown in tropical Asia but can thrive in any moist cultivated and waste areas.

Color: It is white or yellow in color.

Taste: It tastes like broken rice. However, you cannot cook it into separate grains like long-grained rice.

Nutrition value and health benefit: Its nutrition profile is not very different from the other millets. This type of millet is also rich in calcium, phosphorus, magnesium, iron, protein, potassium, and dietary fiber among other things. It is rich in antioxidants that help reduce oxidative stress and eventually protect the body from damage and disease.

How to use: It can be used to make porridge, both salty and savory. It is usually fed to kids as it is easy to bite. Moreover, it is also used to make savory pancakes, which are also known as dosa and cheelas in India.

Region: It is a drought-resistant crop, grown mainly in dry and arid regions of  India, Nepal, China, Russia, Ukraine, Belarus, the Middle East, Turkey, the United States, and Russia.

Taste: It is highly alkaline, easy to digest, and has a slightly nutty flavor.

Nutrition value and health benefit: It consists of a special kind of fat known as lecithin, which is essential in the cells of the body. The high content of lecithin in this millet, helps it support the neural health system in the body. It is also rich in vitamin B-complex and minerals like phosphorus, calcium, zinc and iron, and other essential amino acids like methionine and cysteine. Furthermore, like the general millet profile, it has a low glycemic index, which helps to manage blood sugar levels and reduce the risk of diabetes.

How to use: Proso millet can be used for human consumption, livestock feed, and birdseed. Like foxtail millet, it too can be used as a substitute for rice. You can also grind it into flour to bake flatbreads and bread, or included in salads like tabbouleh as an add-in. It is also used to brew beer.

Local name: It is also known as Kutki (in India)

Region: Little millet is grown in both temperate and tropical regions. It is mostly grown in East Asia.

Color: It is either straw white or grey.

Nutrition value and health benefit: It is nutrient-dense and aids in reducing the risk of diabetes, controlling cholesterol and triglyceride levels and maintaining sound gut health due to its high fiber content.

How to use: It is used as the perfect replacement for rice and can also be used to make porridge, upma (a form of thick porridge usually made with semolina), dhoklas (vegetarian culinary dish usually made with a fermented batter derived from rice and split chickpeas), idlis (soft & fluffy steamed cake typically made of fermented rice & lentil batter), and falafel of sorts with the addition of tofu and vegetables. It also acts as a perfect add-in to salads.

Region: It is mostly found and grown in the tropical regions of Africa.

Color: Kodo millet varies in color from being light brown to dark grey.

Nutrition value and health benefits: Kodo millets have a high fiber and protein content and are extremely beneficial for postmenopausal women suffering from metabolic diseases. It is rich in phytochemicals and antioxidants that help reduce the risk of a lot of lifestyle-related diseases. It is also known to be rich in calcium and phosphorus among other vitamins and minerals and is said to improve bone health and reduce the risk of arthritis.

How to use: You can use kodo millet wholly as a replacement to rice or grind it as flour to make flatbreads, bread, and other baked goods. Fermented kodo millets like most other millets act as a natural probiotic. They are, thus, used to make a lot of non-dairy probiotic beverages.

The post 8 Types Of Millets That You Can Include In Your Diet appeared first on Organic Facts.