This Image Reveals What Really Goes Into A Jar Of Nutella 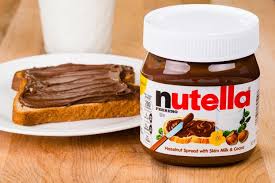 If you have a sweet tooth, and cannot say no to sweets, I bet there is at least one jar of Nutella in your kitchen cabinets! The world-famous Italian spread has won the hearts of billions of people as soon as they tried it!

The delicious spread is added to all kinds of desserts these days, and it is almost an inevitable part of the modern culinary trends. Yet, it turns out that it is much more than the regular and tasty chocolate and hazelnut cream we thought it was!

Wait.. it is less than that!

An image displaying the ingredients of a jar of Nutella has gone viral since it revealed facts most of us were unaware of. Namely, apart from palm oil being one of its main ingredients, Nutella is extremely high in sugar!

The diagram shows layers of the five main ingredients in their raw form: palm oil, cocoa, hazelnuts, skimmed milk powder, and sugar.  It is reported that it represents the real proportion in the jar, and many were shocked to learn that it consists of 50% white sugar!

According to FoodWatch, if one quickly looks at the list of ingredients of Nutella, they are listed as follows: hazelnuts, cocoa powder, skim milk powder, vegetable oil, sugar, soy lecithin, and vanillin.

Yet, companies are obliged to list the ingredients in descending order by weight from the largest down to the smallest on the labels, so here is what Nutella is really made of, judging by its label: sugar, vegetable oil, hazelnuts (13%), cocoa powder (7.4%), non-fat milk solids, emulsifier (soy lecithin), flavor (vanillin).

This means that this spread mainly consists of sugar and “vegetable oil”, and not hazelnuts! The viral image was released after it was reported that the spread may be taken out of supermarkets as a result of its “cancer-causing properties”.

Namely, the report by the European Food Safety Authority (EFSA) indicates that palm oil was more carcinogenic than any other oil.

Nutella denied these claims, adding that they use safe and high-quality palm oil.

Its manufacturer, Ferrero, also claims that the recipe is top secret, and won’t comment if the image is correct.

However, the nutritional information provided on each jar and their website, reveals that there is 8.5g of sugar in every tablespoon of the spread, so every 400g jar contains a huge quantity of 227.2g of sugar.

In April 2012, Ferrero paid $3 million as part of a class-action lawsuit for false advertising that claimed Nutella was “part of a nutritious breakfast.”

Moreover, palm oil is the cheapest oil on the market. Nutella uses this oil to prolong the shelf life of the spread and to obtain a smooth texture.

This controversial oil has been linked to deforestation of major rainforests and wiping out huge wildlife populations. It is added to numerous products we use daily, but its excessive consumption has dramatically and negatively affected nature.

Palm oil plantations currently cover over 27 million hectares of the Earth’s surface, and to make room for these “green deserts”, huge forests and human settlements have been destroyed.

Ferrero claims that Nutella would not be the same without the use of palm oil, and its replacement with alternative ingredients could cost the company an additional $8-22 million annually.

When it comes to this image, they said:

“We don’t disclose the full proportions of the ingredients in Nutella as our recipe is unique and we wish to safeguard this. The product’s label provides simple and clear nutritional information per 15g portion, or two heaped teaspoons, as well as per 100g. The ingredients are also listed on the Nutella website.”

“One of Ferrero’s core nutritional beliefs is that small portion sizes help people to enjoy their favorite foods in moderation. The labeling on our products enables consumers to make informed choices and helps ensure that Nutella can be enjoyed as part of a balanced diet.”

The manufacturer also addressed the concerns that Nutella products might cause cancer:

“The health and safety of consumers is an absolute and first priority for Ferrero and we confirm that Ferrero products are safe. The EFSA (European Food Safety Authority) has analyzed the presence of contaminants in a large number of products and oils stating that the presence of contaminants depends on the oils and fats used as well as the processes they are subjected to.

It is for this reason that Ferrero carefully selects quality raw materials and applies specific industrial processes that limit their presence to minimum levels, fully in line with the parameters defined by the EFSA. In addition, our quality teams constantly monitor such factors and guarantee the food safety of our products to the consumer.”

The post This Image Reveals What Really Goes Into A Jar Of Nutella appeared first on Healthy Food House.