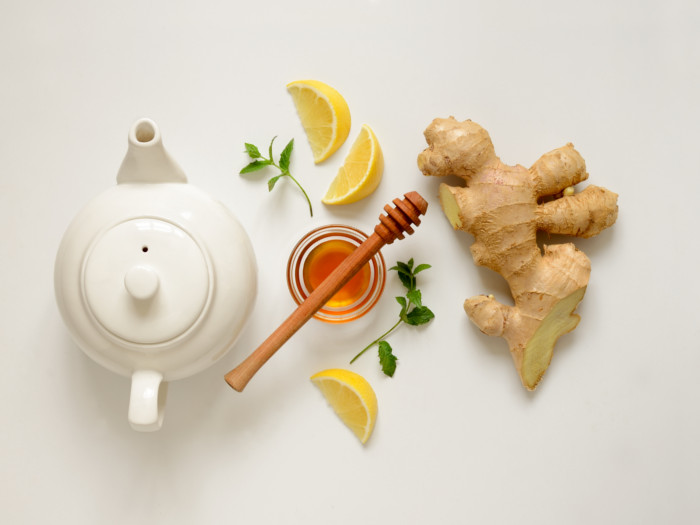 Ginger honey tea combines the spiciness of ginger with the lovely sweetness of honey. It’s the perfect hot and sweet beverage for a cold night. The sharp flavors are also good for you. It is an age-old remedy for a host of illnesses. It is usually used to treat cough and cold. But it has many other benefits. We tell you more about its benefits and how to make it.

While we may not studies on ginger honey tea, there is plenty of research on the individual ingredients. Together they pack a powerhouse of health benefits. Let us have a look at the most important benefits of ginger honey tea in detail.

Ginger honey tea is the traditional remedy for a cold and cough. The hot drink can soothe an inflamed throat and provide relief. Research shows there is a good reason this is not just folklore. Ginger contains gingerol which has analgesic and anti-inflammatory properties. Honey could help relieve cough. According to a study, a spoonful of honey at bedtime helps relieve cough in children. However, honey is not recommended for infants younger than a year.

A cup of hot ginger honey tea could help alleviate nausea. A study comparing ginger to vitamin B6 (used to relieve nausea) found that its effects are similar. When given to pregnant women in their early pregnancy, it helped in providing relief from nausea, dry retching, and vomiting.

Ginger and honey are packed with antioxidants that help us to fight free radicals. This makes them critical in protecting against chronic diseases like cancer. When combined, their effect is further magnified. In an animal study, published in BioMed Research International, researchers found that the combination of gelam honey and ginger contained more potent antioxidants than either of the ingredients alone.

Ginger and honey have both been used by different traditional medicines to treat digestive issues. Ginger has antitumor, antiulcer, and anti-inflammatory properties. It was used as a remedy for gastrointestinal disorders in traditional Indian and Chinese medicines. Honey was similarly used in traditional medicine for gastrointestinal problems. It has an inhibitory effect on some species of bacteria, viruses, and fungi. It can also improve gut health as an article in the journal Food Quality and Safety reported. It was found to improve the microbial balance in the gut.

The combination of honey and ginger could be beneficial for the heart. A 2016 animal study published in Diabetes and Metabolism Journal found that ginger extract can reduce structural abnormalities in the heart. Honey also has a similar protective effect. The phenolic compounds in honey are associated with a reduced risk of heart diseases. So, a cup of ginger honey tea will protect your heart against damage and diseases.

How To Make Ginger Honey Tea?

The best way to take ginger and honey is with a hot cup of tea. The tea has the sharpness of ginger which when combined with the mellow sweetness of honey, makes for a very soothing drink. It’s the perfect drink for cold days or whenever you want a little zing in your life.

The spiciness of ginger is balanced by the sweetness of honey. You can add a dash of lemon to give it an extra zing.

You can learn more about the benefits and how to take ginger and honey in our article Honey & Ginger: Benefits & Recipe Ideas.