Why Are Seaweeds Among The Healthiest Foods On The Planet? Here Are 6 Reasons 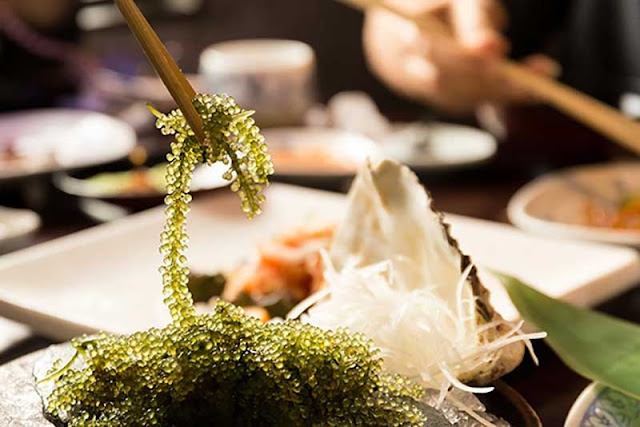 Many of you would be familiar with the seaweed wrapped around your sushi or the one in your warm bowl of ramen noodles. However, despite its recent status as a trendy superfood, these nutrient-dense underwater plants have been a prominent part of Asian diets for centuries, especially in China, Korea, and Japan. Seaweed, also known as sea vegetables, is a blanket term used for a number of species of algae that grow in saltwater. They are extremely versatile and can be used in a plethora of dishes. In addition, they provide a number of health benefits that can improve your overall health.

There are thought to be more than 10,000 species of seaweeds worldwide, reflecting their diversity in flavor and nutritional profile. They can be found in shades of green, brown and even red. However, while red seaweed is the most abundant type in the world, the brown and green variants are the types used more often for culinary purposes. Here are a few of the commonly eaten types of seaweed:

Hijiki. This brown sea vegetable is often served as an appetizer in Japanese restaurants and has become a staple variety of seaweed in many cultural dishes. This type of seaweed turns black when it’s boiled and is associated with a number of health benefits. However,  similar to other types of seaweed, consumption must be practiced in moderation due to its high levels of inorganic arsenic.

Kombu. Eaten all throughout East Asia and used in the popular Japanese stock called “dashi,” this greenish-brown seaweed is a versatile and flavorful addition to a number of dishes. You can use kombu to add an umami kick to sushi rice.

Nori. This type of seaweed is the most recognizable type by a large margin. This is mostly because it is used to wrap up sushi rolls and as a garnish for ramen. While it starts out as a type of red algae, it is shredded then pressed into thin, dry sheets — making it take up a very dark green or even black hue.

Studies show that seaweed harbors a wide variety of health-promoting components and is an excellent source of essential minerals like calcium, magnesium, selenium, and zinc. Even small amounts of seaweed can bring massive contributions to your overall health. Below you can find a list of health benefits that you can enjoy if you eat seaweed:

A Good Source Of Vitamins And Minerals

Other than the aforementioned essential minerals, each type of seaweed harbors a unique set of nutrients. For example, a tablespoon (7 grams) of dried spirulina seaweed can provide you with the following nutrients:

Seaweed also contains very small amounts of vitamins A, C, E, and K. While seaweed only contributes to a very small percentage of the RDIs of the aforementioned vitamins, using it as a seasoning or topping a few times a week can help you get a small boost of nutrients in your diet.

The thyroid gland is responsible for releasing hormones that assist in managing growth, energy production, reproduction, and cell repair. However, this gland relies heavily on iodine to maintain proper function. Thankfully, seaweed is a great source of iodine which it absorbs in concentrated amounts from the ocean. Kombu, for instance, contains 2,523 micrograms of iodine per gram of seaweed, which is equivalent to about 1,682 percent of the recommended daily intake.

Seaweed is also rich in fiber, a nutrient known to be one of the best promoters of good gut health. Studies show that healthy dietary fiber can make up about 25 to 75 percent of seaweed’s dry weight, giving it a much higher fiber content than most fruits and vegetables. Fiber resists digestion and can be used as a food source for the gut microbiota.

In addition, seaweed also has unique sugars called sulfated polysaccharides which can promote the growth and proliferation of good gut bacteria.

Because of its fiber content, seaweed can help you feel satisfied and full for much longer periods. Seaweed is also shown to have anti-obesity effects triggered by a substance called fucoxanthin, which increases the expression of a protein that metabolizes fats.

The fiber in seaweed also plays a role in lowering your risk of developing heart disease. An animal study found that rats supplemented with seaweed not only had significantly reduced LDL or bad cholesterol levels, they also had lower total triglycerides. Another study, published in the International Journal of Molecular Sciences looked into fucans, a substance extracted from seaweed. In that study, the researchers found that fucans can prevent blood clotting as effectively as a prescribed anti-clotting drug.

Diabetes is a major health problem that affects millions of people worldwide. However, a study published in the Journal of Nutritional Science found that fucoxanthin can improve blood sugar control. Another substance, called alginate, was found to thwart blood sugar spikes by slowing down the body’s sugar absorption in the bloodstream.

Learn more about the other benefits of consuming seaweed at Superfoods.news.

Important Notice: This article was originally published at www.superfoods.news by Darnel Fernandez where all credits are due.

All About Health And Nutrition

This will close in 30 seconds