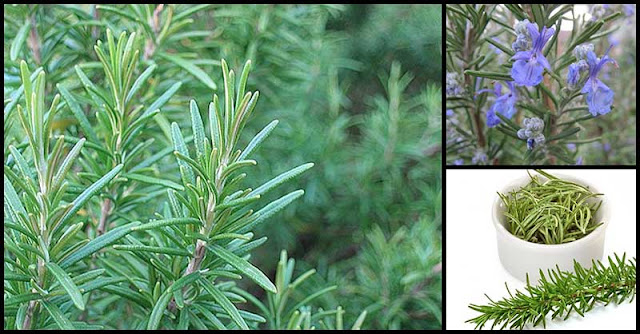 Rosemary is a culinary and healing herb that is frequently found in essential oil form. In recent years, studies have claimed that this oil may be great for hair growth due to its anti-inflammatory properties and the ability to promote nerve growth and improve circulation.

Rosemary oil works by preventing hair follicles from being starved of blood supply, dying off, and eventually leading to hair loss. It may help prevent itchy scalp, dandruff and premature graying.

Rosemary has an active ingredient known as carnosic acid. In one study, it was found that this important component can heal tissue and nerve damage, thus rejuvenating nerves in the scalp and restoring hair growth.

Androgenetic alopecia, also known as male-pattern baldness, is a common form of hair loss in both men and women. In this condition, hair is lost in a well-defined pattern, beginning above both temples. When it comes to this hair problem, rosemary oil works by preventing a byproduct of testosterone from attacking the hair follicles, which is the cause of this condition, according to a study.

Men (with androgenetic alopecia) who massaged diluted rosemary oil into their scalp twice a day for six months have shown the same increase in hair thickness as those who used minoxidil (Rogaine), a common hair regrowth remedy.

In separate research, experts have found that rubbing rosemary essential oil each day for seven months into the scalp of people with alopecia areata can help improve their hair loss as compared to the control group who used the neutral oils jojoba and grapeseed.

Moreover, results of a study indicate that rosemary oil may fight patchy hair loss, or alopecia areata, a condition that affects up to half the population below age 21 and about 20% of people above 40.

In addition to this, one study showed that rosemary oil performed as well as minoxidil, a common hair growth treatment, but with less scalp itching as a side effect.

How To Use Rosemary to Stimulate Hair Growth

Mix several drops of rosemary oil with olive or coconut oil, and apply it to the scalp. Leave it for at least 10 minutes before washing out with shampoo. To start out, do this one or two times per week.