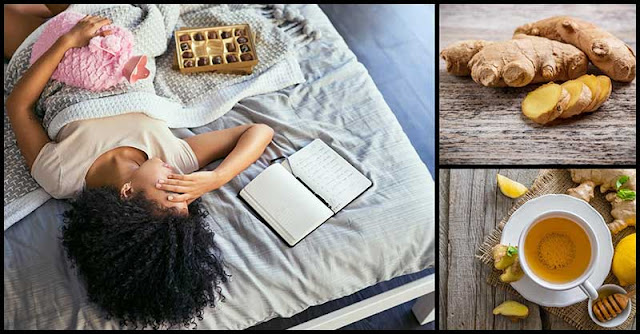 Ginger is spice has a long history of traditional use. Some of its beneficial constituents are gingerol, gingerdiol, and gingerdione, beta-carotene, capsaicin, caffeic acid, and curcumin. Several studies have demonstrated the multiple benefits it can provide to our body. When it comes to easing cramps and soothing menstrual troubles, ginger is one of the best herbs that we can try.

Menstrual cramps also referred to as dysmenorrhea, are cramping aches and pains that typically affect the lower abdomen but may also radiate to the lower back and thighs. They often occur just before and during the first few days of a woman’s menstrual period. During these times, some women may experience nausea, loose tools, headaches, and dizziness.

Ginger possesses compounds with anti-inflammatory effects which is beneficial in inhibiting the body’s production of prostaglandins (a class of pro-inflammatory chemicals involved in triggering the muscle contractions that help the uterus shed its lining). Since researchers believed that the onset of menstrual cramps is linked to excessive production of prostaglandins, ginger tea or ginger supplements may possibly help in reducing menstrual pain.

Aside from this, in a 2015 report published in Pain Medicine, researchers found that ginger was more effective than a placebo in relieving pain in women with dysmenorrhea not caused by pelvic conditions such as endometriosis.

Furthermore, in a report published in 2016, previously published studies on the use of ginger for dysmenorrhea were examined by scientist and results revealed that ginger is more effective than a placebo in reducing pain severity and is as effective as a nonsteroidal anti-inflammatory drug (NSAID) when it comes at reducing pain.

Being an herb with treasured warming ad pain-relieving properties, ginger is not only used as a possible solution for menstrual complaints, but it can also help with nausea, relieving arthritis pain, and preventing morning sickness.