Banana pepper belongs to the chili pepper family and is popular for its mildly tangy taste. It is either brightly yellow or light greenish. As it ripens, it takes on darker shades like red and orange. This chili pepper is used for various purposes, of which the most popular is its use in pickles. Let’s take a look at banana peppers in detail below.

What are Banana Peppers?

Banana peppers originated in South America and are a cultivar of the Capsicum annuum species and thereby belong to the capsicum family. Their taste varies from medium spicy to none at all. The ripest of these peppers edge towards a sweeter taste. They are slightly tangy too.

Banana pepper is also known as yellow wax pepper or banana chili in some parts. It gets its name because of its appearance that resembles a banana. You can use them in pickles, as a pizza topping, sandwich filling, or inside the meat. Some people also add them to their salsa to give it a slightly sweet and interesting taste.

Banana peppers are often confused with pepperoncini or Friggitelli, therefore it is important to establish that they are both different from each other before we go ahead.

Banana peppers can be cooked in many different and delicious ways. Photo Credit: Shutterstock

As per the USDA data, banana peppers are rich in water, energy, fiber, sugar (a very low profile), and protein. They are also a good source of iron, calcium, phosphorus, magnesium, potassium, and sodium. It holds some important vitamins such as vitamin C, niacin, folate, vitamin A, beta carotene, vitamin K, and low quantities of thiamin, riboflavin, and vitamin B-6 too. All of these nutrients make these peppers quite wholesome.

This rich nutrient profile of banana peppers makes them a healthy addition to any diet.

Banana peppers can be made spicy or sweet, as per your taste. Below, we take a look at banana peppers stuffed with minced pork. And there is also something for those looking for a vegetarian alternative! 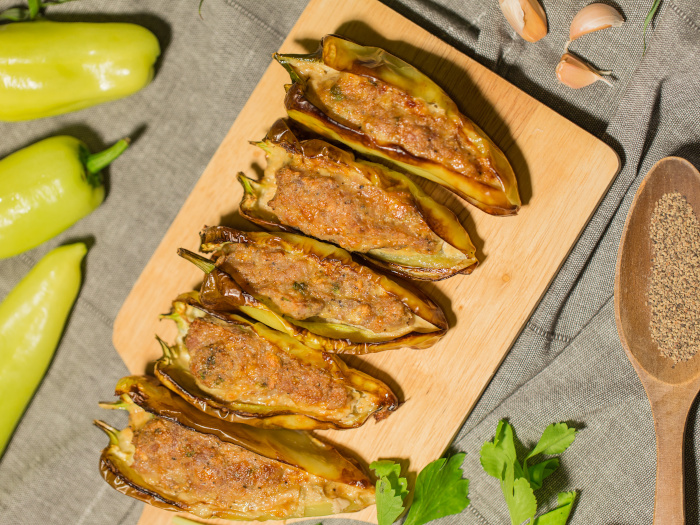 Alternate: If you want a vegetarian version of these peppers, you can alternately use a potato and peanut-based filling. Indians, usually, prepare ‘bharwan mirchi’ where they use this filling with a lot of Indian masalas (spices) that add to its taste.

You can also try modifying the recipe with your ideas and as per your taste specifications.

There are many different ways in which you can prepare these banana peppers, let us take a look at them in detail below.

These are some ways you can cook these peppers. There are no side effects as such of adding them to your diet. However, if you are prone to certain allergies, are pregnant or breastfeeding, or have a chronic condition, it is a good idea to consult with a medical practitioner.