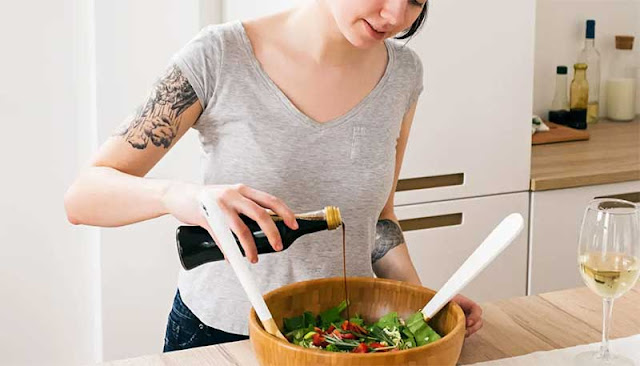 Like many stories worth listening to, this one starts with a glass of wine. The history of vinegar can be traced back to ancient civilizations where it’s said that a barrel of wine was left too long. Revelers cracked it open to find the old wine was now a very sour liquid. Thus, vinegar was born—and we’re really glad it was.

Not only does this kitchen staple have an amazing ability to give just about any dish the right amount of zing, but vinegar also holds promise as a potential health aid. Today, vinegar is considered an affordable and accessible home remedy for an extensive number of ailments from canker sores to bloating. Even better, while other holistic treatments may require an expensive trip to the health food store, vinegar is likely already hanging out in the back of your kitchen cabinet.

Here, discover why vinegar may be one of your most versatile kitchen staples and the various ways you can use it to boost your health.

In the process of making vinegar, alcohol is converted into something called acetic acid – a health-promoting compound that studies show may help to lower blood sugar, promote heart health, and even fight cancer. That sour, biting flavor that accompanies vinegar, pickles, and even sourdough bread? That’s acetic acid.

“Numerous studies have linked vinegar consumption to lower blood sugar,” says Jessica Cording, M.S., R.D., CDN, registered dietitian, and health coach. “The acetic acid in vinegar is thought to be what plays a role in assisting with blood sugar management, as it interacts with starch-digesting enzymes.”

The fermentation process and resulting probiotic bacteria in some varieties of vinegar such as raw, unfiltered apple cider vinegar has also been touted as a beneficial factor, says Cording. It’s also been used medicinally and as an antibacterial agent, likely due to its acidity, and some studies have also explored the potential antioxidant benefits of vinegar.

Health Benefits And Uses Of Vinegar

While more research on vinegar is needed before the benefits below can be taken as true recommendations, here’s what the current science says about the possible perks of adding vinegar to your daily diet:

1. Vinegar may have a potential role in diabetes management

More than 30 million people in the United States have diabetes, the majority of whom have type 2 diabetes. At its core, diabetes is a disease that affects the body’s ability to control blood sugar (or glucose) levels. People with diabetes have built up a resistance to the blood-sugar-regulating hormone insulin, rendering them unable to lower blood glucose levels after meals. Enter, vinegar.

In one study, vinegar was found to improve insulin sensitivity during a high-carb meal by anywhere from 19 to 34 percent, and in another, it was shown to reduce blood sugar by as much as 34 percent after participants ate white bread. Other research has indicated that a dose of vinegar before bedtime helps to lower waking glucose levels. Vinegar does have the potential to interact with certain diabetes medications, though, so it’s important to consult with your doctor before starting any new home remedy.

One of the more impressive health benefits of vinegar may be its potential for preventing heart disease and improving heart health. Heart disease remains the leading cause of death in both men and women in the United States, so it’s worth exploring every option when it comes to prevention and treatment.

High triglycerides can increase the risk of heart disease, heart attack, and stroke. Vinegar, however, has been shown to lower triglyceride levels. Beyond that, animal studies indicate that vinegar may help prevent high blood pressure.

Anecdotally, apple cider vinegar is a go-to home remedy for a sore throat. While there’s no clinical research to back this up, plenty of recipes exist that are said to soothe the pain. If you’re looking for relief, there’s no harm in trying one of these mixtures.

Vinegar, salt, and honey – If the acidic taste is too much for you, add a touch of honey. Combine 1 tablespoon of apple cider vinegar, 1 tablespoon of honey, and 1 teaspoon of salt in a warm glass of water and gargle.

While clinical research is limited, vinegar may have a positive impact on cancer prevention and treatment. One study conducted in rats showed that the acetic acid in vinegar could actually kill cancer cells. Another study suggested that acetic acid has the power to stop cancer cells from growing in the lab. Because the study was on animals, it’s difficult to say whether or not these same effects would be seen in humans, but they’re promising nonetheless.

5. Vinegar may help with bloating and heartburn

If you’re prone to digestive woes, there’s a chance that vinegar can help. While these specific claims may not be backed by clinical research, there is ample anecdotal evidence that consuming vinegar (especially apple cider vinegar) is a cure for constipation, speeding up otherwise sluggish transit time. Vinegar is a natural mild diuretic (along with other foods like citrus, celery, and beets), says Cording—and this may be why it has the ability to banish bloat and constipation for so many. There are also some data showing that apple cider vinegar was able to reduce symptoms of acid reflux in a small number of patients.

Though apple cider vinegar gets all the fame, there are many different types out there with the same or similar health benefits.

“I tend to recommend variety—mostly to keep you from getting bored and burnt out on any one type,” says Cording. “While some varieties will vary in terms of sugar content (for example, a very concentrated balsamic glaze versus raw apple cider vinegar) unless you’re consuming massive quantities, it’s not going to be a deal-breaker.”

Aside from the sore throat remedies listed above, vinegar can be added to salad dressing, coleslaw, and really almost any recipe. As you start to experiment with vinegar, consider adding these variations to your favorite foods:

If you’re consuming apple cider vinegar in a beverage form, always remember to dilute appropriately. Despite its many benefits, one of the possible side effects of vinegar is its potential harm to tooth enamel and the esophagus via the high acidity. Never drink it straight. Be sure to dilute 1 tablespoon of vinegar with at least 1 cup of water before consuming.

Important Notice: This article was originally published at www.mindbodygreen.com by Elsbeth Riley where all credits are due. Expert review by Megan Fahey, M.S., R.D., C.D.N.