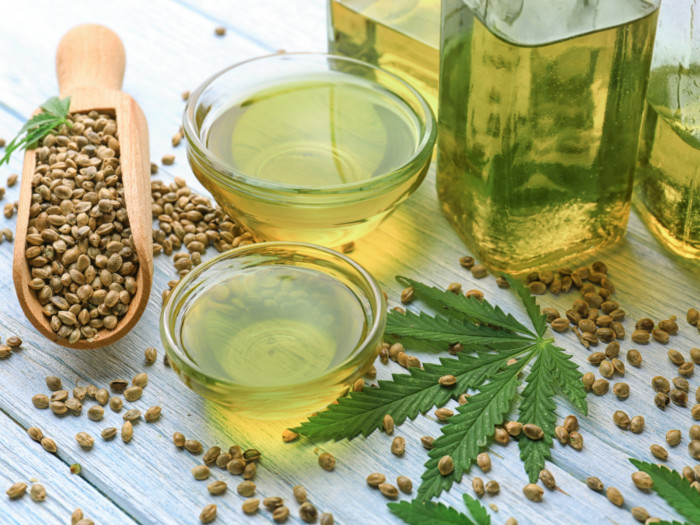 Hemp oil is the nutrient-dense product generated by pressing hemp seeds. This oil is derived from the hemp plant and has many proven benefits for physical and mental wellbeing.

What is Hemp Oil?

Hemp oil is a concentrated oil derived from the seeds of the hemp varietal of the Cannabis sativa plant. The many benefits of using this seed oil come from the fatty acids, minerals, and cannabinoids that the oil contains, including CBD (cannabidiol). Many people have heard of Cannabis sativa because marijuana is a subtype of this plant, which is known for its psychoactive effects. These psychoactive effects are due to the high presence of tetrahydrocannabinol (THC) in this plant. Hemp oil from hemp seed plants, on the other hand, is specifically bred to have low levels of THC.

To be considered a hemp plant, there cannot be more than a 0.3% concentration of THC in the plant’s extracts. Therefore, despite a great deal of public concern and confusion around this issue, reputable hemp oil is derived from a completely different plant than marijuana, a plant that is illegal in many parts of the world.

That being said, hemp oil does contain small amounts of cannabidiol (CBD), as shown in this article from the Journal of Nutraceuticals, Functional and Medical Foods. This cannabinoid has a number of relaxing and therapeutic effects on the body, along with numerous other non-psychoactive cannabinoids, such as cannabigerol (CBG) and cannabinol (CBN).

The hemp plant has been widely cultivated for thousands of years, and all parts of the plant can be used for a variety of other purposes. Hemp can be made into sustainable rope, twine, and clothes, as well as shoes, food, paper, and biofuel. Given the recent surge of popularity surrounding the therapeutic effects of CBD oil, accelerated by the legalization of hemp products in the United States, a great deal of attention has turned to this unassuming and powerful substance—hemp oil.

The reason that cannabinoids are so beneficial and effective on the human body is that our nervous system is lined with cannabinoid receptors. This may sound strange, but our body also naturally produces cannabinoids. It is so significant, in fact, that experts have recently deemed it an entirely new system—the endocannabinoid system (EC system). Interestingly, this system works in the opposite direction of our normal nervous system; a cannabinoid is made when the post-synaptic neuron is triggered, which then produces a cannabinoid that is released from the cell, where it travels back to the pre-synaptic neuron, where the cannabinoid receptor is located.

There are different types of cannabinoids and different types of receptors. While marijuana would cause a flood of THC in the endocannabinoid system, resulting in the feeling of being “high”, the use of this oil interacts with receptors by blocking those responsible for sending our pain signals. In other words, they lead to pain-relieving and anti-inflammatory effects in the body.

As explained in the above section, hemp oil, with its more than 30 different cannabinoids, can have many different effects on the body, based on the type of receptors being triggered on the presynaptic neurons. When it comes to the management of anxiety, there have been many positive studies regarding the effects of hemp oil on social anxiety, generalized anxiety disorder, post-traumatic stress disorder (PTSD), and sleep disorders. The studies have varied in design and scope but point towards a definite benefit through the use of hemp oil that is high in certain cannabinoids.

One of the major benefits of hemp oil is its ideal combination of omega-3 and omega-6 fatty acids, which can have a number of positive effects both internally and topically. It is specifically a great source of GLA, gamma-linolenic, a type of omega-6 fatty acid that has been widely studied in relation to the skin. For this reason, many studies have found that the use of this oil is able to treat acne, prevent inflammation and itchiness, speed the healing process, reduce the appearance of scars, and help to treat psoriasis and eczema. There are also a number of antibacterial, anti-fungal and antiviral properties conferred by the use of hemp oil, which bolsters the immune defenses on your body’s largest organ.

Aside from the analgesic, anti-inflammatory, moisturizing, anti-anxiety and antidepressant effects of this wonderfully versatile oil, it has also been found to help with PMS symptoms, menopause, arthritis, heart health, the immune system and detoxifying the body.

The number of applications for hemp oil seems to be increasing every day, including tinctures, capsules, and concentrates, as well as topical creams, sprays, vapes. This is in addition to all the pure oils that you can buy, hemp oil-infused sodas, cakes, candies, and brownies. As more attention is put on this versatile oil, the market, and a variety of products continues to expand. Different products will have different concentrations of cannabinoids, and some of the products are rather expensive, so only a small amount is needed to have an effect.

As opposed to the effects of THC, the effects of hemp oil are not psychoactive, so there isn’t as much danger of using too much. In most cases of using this oil, you will get a deeper night’s sleep, additional relief, or an even better mood. That being said, it is always most advisable to follow the product instructions and consult a doctor before using if you have any chronic conditions or prescriptions.

Clearly, there are many positive effects of hemp oil, but there is a risk of certain side effects, depending on how you are using the oil. If you are adding this oil to your food, remember that it is high in omega-3 and omega-6 fatty acids; these are “good fats”, but they should still be consumed in moderation. Some users also report trouble with their digestive system, as hemp oil can cause soft stool, increasing the likelihood of diarrhea and stomach cramps. As noted above, it is best to speak with your doctor about any pre-existing conditions before adding this oil to your health regimen.

While some people use these terms interchangeably, there are some major differences between the two oils. Hemp oil has low levels of CBD but has a wide range of cannabinoids, along with omega-3 fatty acids and other minerals. CBD oil is made by pressing the flowers, stems and other plant material from the hemp plant, and has a very high CBD (cannabidiol) content. Higher levels of CBD make that oil more effective for pain, anxiety, and inflammation, but hemp oil is more effective in terms of skin health and functioning as a more widely used oil (i.e., in cooking). CBD oil is also considerably more expensive than hemp oil.

Finally, both of these oils exist on the edge of federal regulations, and with the changing landscape, quality standards are not always consistent. Only purchase hemp oil products from legitimate retailers with trusted reputations.